As a lifelong audio enthusiast, and all around “bass head” I was that kid with way to many subs in my little pick-up. Early on I connected with how speakers works and what makes a good bass speaker. I was always on the hunt for a “large displacement driver”. I didn’t realize it at the time but I was actually collecting knowledge and forming this invention in my head, then suddenly one day it just hit me. Thus the idea of my product was founded in 2000.

Since then I have studied Electrical Manufacturing, Computer Aided Drafting (CAD) and loud speaker design and building. I spent years on the front lines of car audio sales and retail management as well as installation. I have designed numerous car, home and boat audio systems. These experiences have led me to discovering one common truth, more often than not, the Sub Woofer is the center piece, the pride and joy of each system. No matter how much bass you have, its never quite enough or hits quite low enough, and lastly, these conventional cone woofers take up a lot of space. 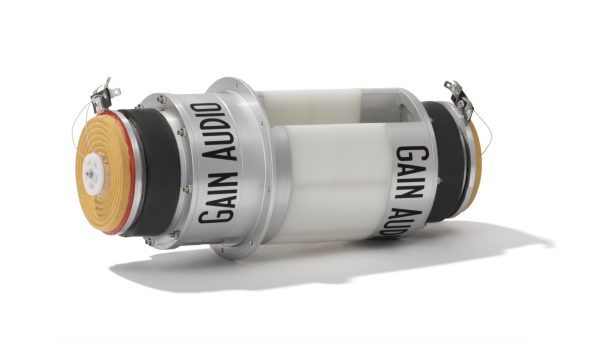 I wanted to keep it simple, and doing so will pay off. Every part in this design is symmetrical. Meaning it doesn’t matter what orientation each part is assembled in, it fits. Each piece is inner changeable. This will prove to be important during manufacturing, assembly and maintenance. This will also allow for future upgrades and configurations. Allowing the enthusiast consumer to change a single component and get different T/S parameters, giving full flexibility to environment demands or desirers.

Due to its mechanical nature, this design has negated some undesired characteristics of conventional cone speakers. Most of the time, this driver design will operate well above its resonance frequency (FS). This gives a very flat response through the desirable bass frequencies 20Hz-200Hz as seen in the (Near Field) image below. Another desirable feature in mechanics is an extremely flat impedance curve as seen in the (Impedance Curve) image below. This will allow for a less expensive amplifier. While this driver is power hungry, at least its not putting a load back to the amp. This will help keep the system running cooler and more efficient.

Some aspects of this test might seem unfair.. Please note my comparison is based on a few principles, 1st single mounting hole of 4.3". 2nd Displacement. And 3rd impedance and available power. This test is a little like comparing a Toyota Prius to a NHRA Nitro car. The TB driver is more efficient, however at its peek, its displacing 3.45cu". Actually the TB motor and coil is larger than the GA Prototype and even handle more power. But I found (as with many "cone" speakers), the maximum potential of the driver is reached long before the power limits. The GA Prototype has 14.5cu" displacement (over 4x grater than the TB), and that's just a 4x4" version. Soon I will be extending one of the prototypes to a 4x7" length that will displace 24cu". Sure these requires more power to get there, but you got to ask yourself.. more than 4-8 TB drivers.. perhaps more testing will answer these questions, and for the most part, power is cheep and not the limiting factor with cone drivers. Also the GA prototype internal parts are still made of SLA 3D printed plastic with many limitations. There can only be improvements made as the parts are replace with "real" plastic design to handle the abuse and were proper tolerances can be held. More on this to come as I continue to upgrade.